The popular choir concert series with "Man(n) singt deutsch und ...." of the Gesangverein Sängerkranz 1876 Watzenborn-Steinberg will be continued on Sunday, 7 November. 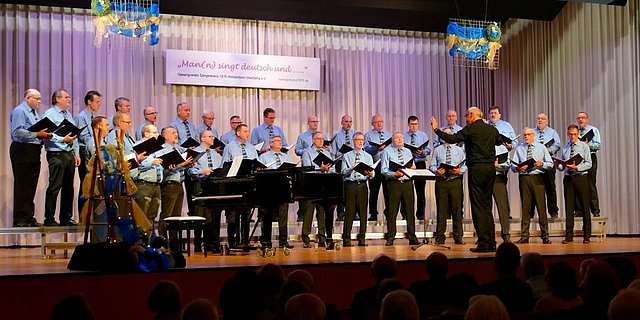 The Sängerkranz singers around choirmaster Peter Schmitt - here the vocale at the last performance of 2019 - are looking forward to their first big concert after the Corona break with "Man(n) singt deutsch und ...". Photo: Schmidt

WATZENBORN-STEINBERG - After a year of enforced Corona break, it's that time again, the popular choir concert series with "Man(n) sings German and ...." of the Gesangverein Sängerkranz 1876 Watzenborn-Steinberg will be continued. On Sunday, 7 November, at 4 p.m., renowned choirs with the women's and men's choir of Horbach under the direction of Ernie Rhein, the mixed choir of Concordia Liederkranz & Young Generation Ettingshausen with choirmaster Axel Pfeiffer and vocale as well as men's choir of the Sängerkranz with Peter Schmitt at the baton will have a choral-musical rendezvous in the Hans-Weiß-Saal of the Volkshalle in the "Singende Stadt". Accordingly, those responsible around Schmitt, chairman Werner Funk and honorary chairman Karl-Heinz Gros are pleased that the choir can once again sing in public in the large hall. The Sängerkranz has agreed on the 2G access rules for the concert, which means that only fully vaccinated and recovered people can take part in this event. One test is not enough.

The Sängerkranz initially bridged the past pandemic times with online and outdoor rehearsals at the Obersteinberg farm. In the course of the relaxation, they were able to rehearse again in the Volkshalle in presence. There were hardly any performances during this time, except for an open-air serenade and an open-air concert on German Unity Day last year at the Christuskirche.

So the singers around Peter Schmitt are very excited about the upcoming concert. The fact that they succeeded in attracting excellent choirs with the singers around Ernie Rhein from Horbach in Freigericht as well as Axel Pfeiffer's mixed choir of Concordia Liederkranz & Young Generation Ettingshausen, they register as a great success and a sign of hope for the scene, because many choirs are still hesitant when it comes to public performances. Progress in vaccinations and the regulations of the Hessian state government now make it possible, even with the application of the 2G access rules, to do without masks, distance and hygiene concepts and capacity restrictions in the Volkshalle.

Musically, the Sängerkranz choristers have again come up with a varied repertoire. From the German folk song "Schäfer's Sunday Song" to the Comedian Harmonists' classic "Ein Freund" to German-language choral literature, Scottish and Swedish folk songs as well as evergreens can be heard. The selection among the choir guests is correspondingly diverse.