Pohlheim (rge). When at the end of the choir concert "Man(n) singt deutsch und ..." the classic "Das Morgenrot" sounded together, the audience as well as the singers in the choirs were obviously overjoyed. There was prolonged applause. 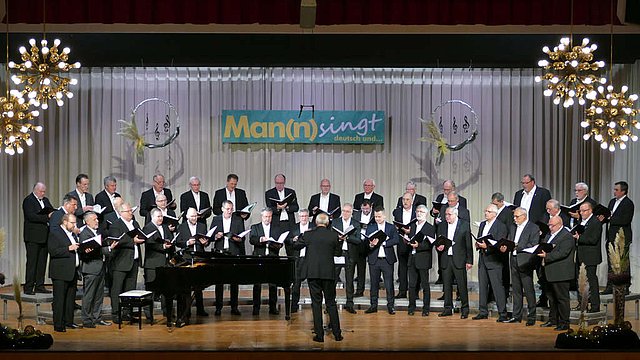 Finally, the popular choir concert could take place again in the Hans-Weiß-Saal, to which the Gesangverein Sängerkranz, after a year's pandemic break, had once again invited well-known choir guests in its 13th edition. It offered lovers of first-class choral music from folk to classical to pop everything that the audience had to do without live for a long time. The only downer was that the guests of the two announced choirs from Horbach in the Main-Kinzig district with choirmaster Ernie Rhein had excused themselves and had not arrived due to some cases of corona within their choirs that had been discovered the week before.

The two choirs from Ettingshausen, the Concordia-Liederkranz with its mixed choir and the Young Generation choir with conductor Axel Pfeiffer, were in the best of moods for this, as were the host men's choir and Vocale of the Sängerkranz Watzenborn-Steinberg with choirmaster Peter Schmitt. The concert took place under 2G arrangements.

The 38 singers of the Sängerkranz intoned "Das ist der Tag des Herrn" (This is the Lord's Day) from "Schäfer's Sunday Song" right at the beginning, setting the tone for two hours of the best choral music. Schmitt informed the guests that despite the pandemic, not a single rehearsal had been cancelled. Online rehearsals and such as at the Obersteinberg farm helped to overcome the time of restrictions. And so they proved themselves in good voice, as with the Comedian Harmonists hit "Ein Freund, ein guter Freund" (A friend, a good friend), whose lyrics are not an empty phrase but are lived in the Sängerkranz. The 30-voice mixed Concordia Liederkranz choir followed with "Bunt sind schon die Wälder". The folk song "Tanz mir nicht mit meiner Jungfer Käthen" ("Don't dance with my maiden Käthen"), arranged by Gunther Erdmann, came along briskly. With Mark Forster's pop song "Sowieso" they showed their richness of variation and that with joy in music one can also survive the difficult Corona times.

Spirituals like "My Lord what a Morning" and "Little Lamb" as well as Schubert's "Schöne Nacht" were further contributions by the Sängerkranz singers. With "Ihr von morgen" by Udo Jürgens, Schmitt had chosen a hymn to the future for the audience and thrilled them with his piano solo.

A "Happy Birthday" went with flowers to mayor's wife Gabriele Ruck, before the last piece ended in the large Volkshallen choir.