The Watzenborn-Steinberg male choirs of the Sängerkranz and Harmonie choral societies now form a vocal unit:

Pohlheim (ger). With the new start of singing lessons after the summer break, it is now official in the "singing town" of Pohlheim: the Watzenborn-Steinberg men's choirs of the Sängerkranz 1876 and Harmonie 1906/1983 singing societies now form a singing unit. Under the name "Watzenborn Men's Choir", the choir will perform in public in the future and wants to create a new brand for the Limes town in the choral scene, the club leaders of both traditional choirs agreed. The chairpersons Wilken Gräf of the "Harmonie" and Werner Funk of the "Sängerkranz", together with the musical director Peter Schmitt, informed about this during the first choir rehearsal at the "Zur Ludwigshöhe" inn. Both choirs have their historical origins in Watzenborn, a part of the northern Pohlheim district, hence the name. 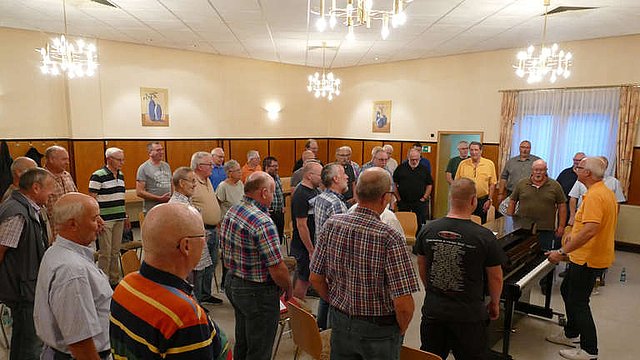 The Watzenborn Male Choir under the direction of Peter Schmitt at the "Zur Ludwigshöhe" rehearsal venue. Photo: Schmidt © Schmidt

The "Harmonie" and "Sängerkranz" have been harmonising well for a long time, as they already jointly organised International Choir Days in 2016 with choir guests from as far away as Central America. Why not sing together then, was the question that was asked again and again, Peter Schmitt also recalled. The number of singers in both choirs declined as everywhere else, Corona was another caesura. So the question became more urgent: how do we go on? The goal was to create a larger choir that could sing more difficult repertoire and continue the old traditions of male choral singing. It was a good fit, as one quickly realised in the conversations. In addition, the first rehearsal performances, such as at the National Singing Competition in the spring or in the summer in the Volkshalle and the Heimatmuseum, put an exclamation mark on the local choir scene. "Great sound!" said the adjudicator in Cleeberg, music director Gerd Zellmann from the Main-Kinzig district, about what he heard. And the two choir directors with the "Singing Conductor" of the Harmonie Hans Happel and from the Sängerkranz Peter Schmitt were also in internal agreement. Schmitt will lead the Watzenborn men's choir and the 74-year-old Happel will support him when necessary. More than 50 male voices are the vocal potential from which the choir can draw. The fact that the "Ludwigshöhe" has been chosen as the permanent rehearsal venue is due to the fact that the Sängerkranz club's venue, the "Goldener Stern", no longer manages the large festival hall, informs Sängerkranz chairman Werner Funk. It is important to both associations that they do not lose their identity. The executive committees will therefore continue to meet in their traditional venues and hold traditional events there.

For Peter Schmitt, the organisational goal has been achieved and the musical goal has been set. He emphasises the respective strengths of the "Harmonie" in the bass voices and the "Sängerkranz" in the tenor voices, which together form a wonderful body of sound. In terms of repertoire, there is a large overlap anyway. The mood is correspondingly good, he observes. He can already imagine a choir project for next year with a trip of the "Watzenborn Male Choir" to Wartburg Castle for a workshop with André Schmidt from the University of Music in Weimar. Choir rehearsal is always on Thursdays at 7.30 pm. New singers are welcome.

Unaffected by all these changes, the Vocale remain as an independent Sängerkranz choir under the direction of Schmitt, which continues to rehearse every Saturday in the school hall of the Volkshalle at 5 pm.